Fan Fact:
According to Legal Sports Report, Nevada sports betting revenue was $38.1 million in February, up 6.3% from last year. March estimates are not expected to be as positive.
Top Story

The National Hockey League is offering parents free remote access to a hockey-themed curriculum for elementary and middle-school-aged students.

What are they learning?

HockeyScholar is powered by EverFi, an international technology company driving social change through education, and is part of the NHL and the NHL Players’ Association Future Goals Program. The curriculum of 12 learning modules, previously only available through educational institutions and educators, focuses on science, technology, engineering, and mathematics (STEM) skills.

Activities include exploring the engineering behind equipment such as skates, sticks, and goalie pads, and calculating the surface area and volume of the ice in a rink. Student can also explore geometry and how angles are a key component of the game, and examine how player speed and game dynamics are premised on mass, velocity and kinetic energy.

This newly created parental access to the Hockey Scholar Program provides all families with educational resources to support them and educate their kids with impactful STEM learning modules during this difficult time and allows families to have some educational fun at home along the way.

On the surface, coronavirus quarantines may seem like a positive event for the television world, with millions of Americans stuck at home. But if unemployment soars, consumers will look for ways to shed excess spending – and with dozens of free and low-cost streaming applications available as cable replacements, the traditional pay-TV world knows it’s vulnerable to an acceleration in cancellations. Moreover, the Federal Communications Commission has already issued a warning for distributors and owners of local news affiliates with contract renewals coming up: don’t even think about blacking out networks for the next two months.

As the crisis wears on, cable operators and the largest programmers have called a temporary truce and set aside a polarizing question for the time being: Refunds on undelivered programmings, such as the National Basketball Association and the Olympics.

As of last week, Visa—a sponsor of the Olympic Games for over 30 years—had 80% of its Olympics-centric creative completed, and with just four months until the opening ceremony in Tokyo was planning to begin its rollout this spring. Those plans, of course, came to a screeching halt after the International Olympic Committee (IOC) announced that the Summer Games would be postponed until 2021.

While that creative is on hold, in the meantime, the company put out a call to its Team Visa athletes—the athletes it sponsors ahead of and during the games—to fuel a different sort of creative. Chris Curtin, Visa’s chief brand and innovation marketing officer, said Olympians were asked to film themselves engaging in one of the practices that we’re all being instructed to follow right now to prevent the spread of COVID-19: hand-washing, using hand sanitizer and social distancing. 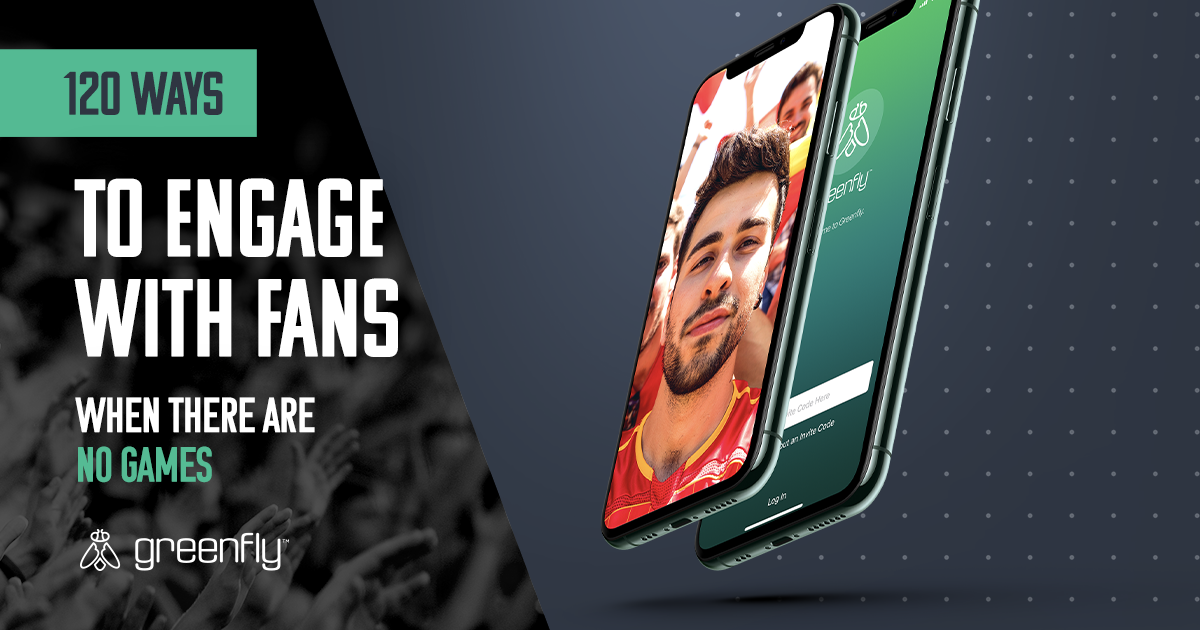 This is a moment for your creativity to shine. You have a captive audience, waiting for something novel and exciting. Help your fans get through this challenging time by continuing to engage and cheer them on. Get their competitive juices flowing. Bring your athletes and staff into the conversation (they’re sitting at home, too!). For inspiration, here’s a proven selection of 120 inspirational ideas that your team can use to keep your fans engaged.

At Greenfly, we’ve seen sports organizations of all types rally their advocates to keep fans inspired and captivated. We’ve seen the hundreds of teams and leagues that use the Greenfly brand advocacy platform adapt quickly over the past month to connect with athletes and staff in our “new normal”, and share stories across the globe. Now you can, too. Get the free guide HERE.

The NFL’s owners have voted to expand the playoffs to include 14 teams and will add postseason games on Nickelodeon and NBCUniversal’s new streamer Peacock.

With the NFL’s 2020 schedule not affected by the coronavirus as yet, its Wild Card Weekend is set to include three games on Saturday, January 9, and three the following day. In addition to CBS’ January 9 broadcast — which also will be live-streamed on CBS All Access — the league said a separately produced telecast of the game tailored for a younger audience will air on kid-focused cable net Nickelodeon.

Coronavirus could reduce TV ad spending for NBA, MLB, and NHL by $1B

According to MediaRadar, an advertising intelligence and sales enablement platform, there might be $1 billion in lost advertising spending combined for the National Hockey League, the National Basketball Association and Major League Baseball because of the coronavirus pandemic.

MediaRadar’s analysis found that broadcasts of the NBA, MLB and the NHL, combined, accounted for over $1 billion in advertising spend from March 2019 through May 2019 (the time period we are likely to be without sports). Specifically, NBA broadcasts generated $839 million in advertising revenue, the NHL games brought in more than $120 million, and MLB brought in more than $60 million.

What else is trending?
Rad Ad


The Washington Wizards announced the creation of the Wizards Podcast Network. The network will house the two existing Wizards' podcasts, Off The Bench and The Wizards Global Podcast, as well as create a new one, Full Court Press. Full Court Press will be hosted by the Wizards' radio announcers, Dave Johnson and Glenn Consor and feature interviews with league personnel. The network's creation signals the rise in popularity in podcasts across the sports world.